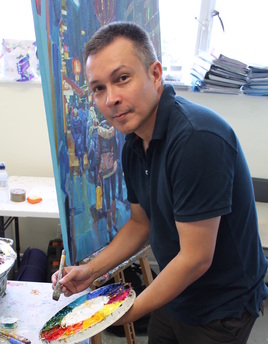 ​Working as an illustrator in the UK for over 15 years, Hashim gained valuable experience in developing a backbone of drawing, conceptual ideas and various painting techniques. His illustration client list varied from New Yorker magazine, newspapers such as The Times, Daily Express, Daily Mail, Time magazine, ad campaigns for Smirnoff, Esso and a stamp for The Royal Mail. Throughout his career Hashim has won many awards; including in 2009 the SAA (Society of All Artists) Artist of the Year, having won the Professional title in 2005 and 2007. He worked with the art manufacturer Daler Rowney in their relaunch of the System 3 Acrylic range producing paintings for the ad campaign and demonstrating the versatility of the paint at various events and on live television. His first book entitled ‘Vibrant Acrylics’ was published by Search Press in 2012 which has now been translated into French, German, Italian and Dutch and includes a companion DVD of the same name. He has been featured in various art publications including The Artist, Pratique des Arts, Art of England and is a regularly contributor to the Artists and Illustrators magazine. More recently Hashim has been featured in a publication entitled ‘Painting in Acrylics; The Indispensable Guide’, Who’s, Who in Art and co authored ‘ Artists Painting Techniques’ published by Dorling Kindersley in 2016.His next book ‘Painting Urban and Cityscapes’ was released in 2017, published by Crowood Press. Hash's latest book in 2019 is 'Painting Portraits in Acrylics', published by Search Press reached number 1 in Amazon's Acrylic Painting Techniques category.
He is represented by several galleries in the UK and has exhibited with the Royal Institute of Oil Painters, New English Art Club, Society of Wildlife Artists, David Shepherd Artist of the Year and Royal Society of Marine Artists at the prestigious Mall Galleries in London. He is in the UK's National Art collection and has also taught his unique techniques to art schools in the UK, Italy and France.